June 14, 2021 - By implimenting an alternate parking concept, The Wynn Hospital would produce a Better Hospital Neighborhood. 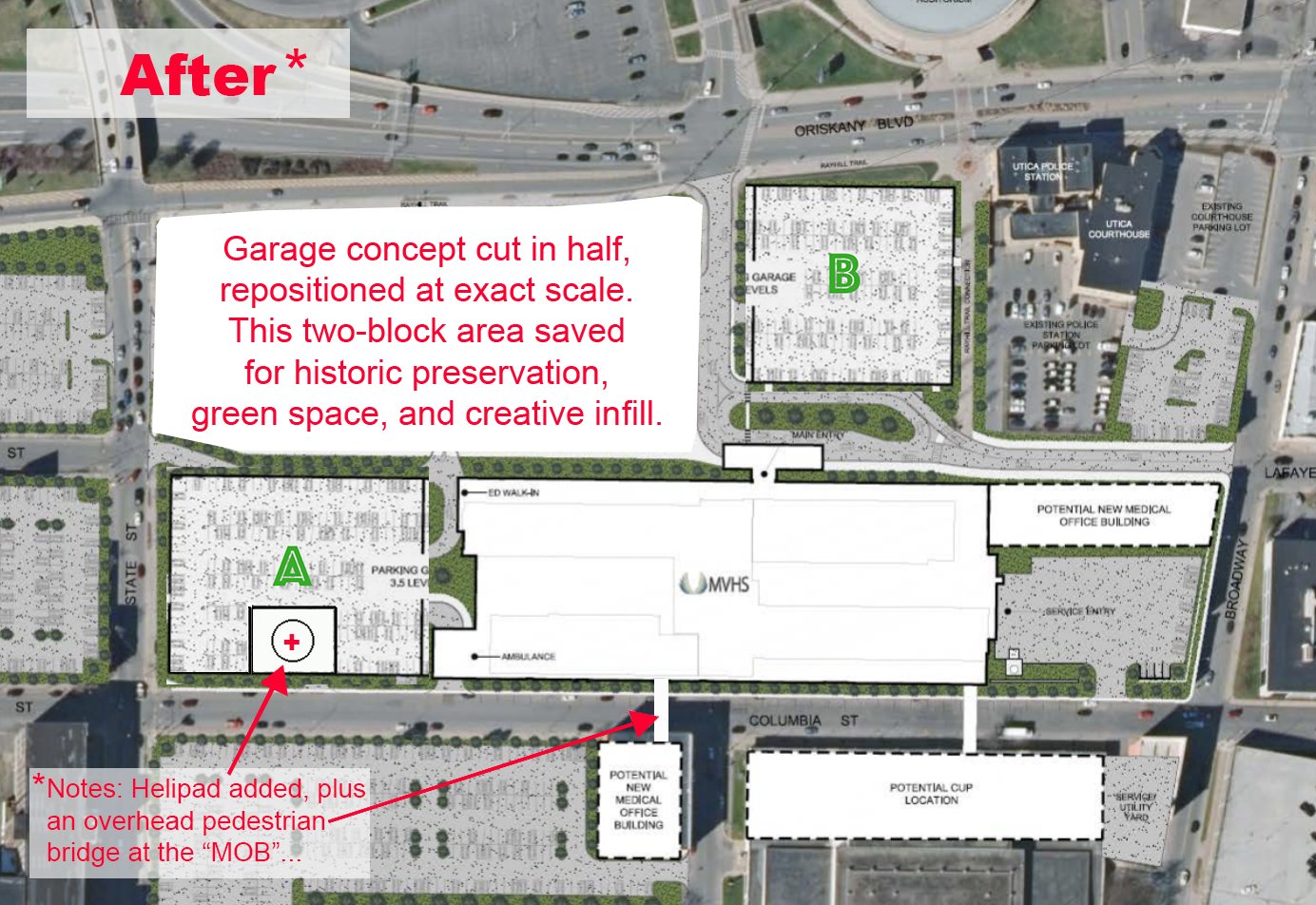 This modified parking garage layout has an Action Plan.

"The initiative doesn’t have any specific plans at this moment, but the group hired architecture firm NBBJ to engage with the community and make a plan that will “embrace a broad definition of downtown Utica.” The new definition will stretch from Baggs Square and the Bleecker Street corridor on the east, to the Brewery District on the west; from Harbor Point on the north to Oneida Square and the arts district on the south. So far, the group has identified seven districts that will be included in that new definition: the brewery district, Bagg’s Square, Oneida Square, a sports and recreation district, an arts district, a health and wellness district where the hospital is going, and harbor point."

View their seven districts that are included in the new downtown utica definition...

Also reported, "The initiative doesn’t have any specific plans at this moment, but the group hired architecture firm NBBJ to engage with the community and make a plan that will “embrace a broad definition of downtown Utica.”

January 27, 2018 - BUD is representing a BIG portion of Downtown Utica, the CoLa Neighborhood, and it is a very productive one - with over 40+ Businesses!

We're posed to do even more, first by protecting our streets and alleys, the street grid, Historic Buildings, and CoLa's existing businesses. Next we'll embark on our bigger Vision.

Downtown Utica has been returning to prominence, key properties in the Columbia Lafayette Neighborhood are posed for acquisition for reuse and redevelopment...

So let's put energy into the Columbia-Lafayette Neighborhood. With energy and a plan, BUD will develop our neighborhood just as Bagg's Square and Varick Street have. Connect with BUD on Facebook and Twitter

Positioned in the center of Utica's rebounding neighborhoods, the Columbia-Layette Neighborhood is prime real estate:

As mentioned above, but it bears repeating, Downtown Utica's CoLa Neighborhood is Home To 40+ businesses. As City Common Council President states, "Utica Has A Lot To Lose".

We'd love to hear from you, feel free to E-mail BUD Also, connect with BUD on Facebook and Twitter.

Our friends at #NoHospitalDowntown have also been working to stop the hospital concept threatening our neighborhood, and They've Collected Many Voices In Opposition.