The following is an accounting (a work-in-progress) of Utica's Urban Renewal projects as well as roadway developments. Together they leveled a great many buildings and closed or eliminated numerous streets and alleys.

After World War II cities across the nation were looking to dust-off their old neighborhoods; preparations were being made for a brave new world filled with modern advancements.

Throughout the 1940's and 1950's urban centers embraced "urban renewal" emboldened by federal legislation. City populations, enabled by increasing modes of transportation, had long been migrating to suburbs. Outward migration only increased after the war. Inner cities were increasingly challenged by large legacy buildings and old neighborhoods.

In Utica the story was no different, it just arrived a little later.

Following are Utica's urban renewal projects. This is a work in progress as BUD works to fend-off another urban renewal round at the hands of MVHS's New Hospital Concept. Some headings are place-markers, other just an introduction, and others offer links to larger explanations. One may wish to consider Utica's urban renewal in the context of Utica's Major Milestones.

September 26, 1959 - Urban Renewal director Ray B. Martin (held position from May 1958 to July 1965), stated on September 26, 1959, "22 acres west of City Hall calls for complete razing of all buildings, sale and development of all cleared land by private investment." This led to Utica's current City Hall, but only after years of delays and other canceled projects.

Urban Renewal, thought to be a solution for many cities (like #DowntownUtica and surrounding neighborhoods) failed- neighborhoods were decimated! A @uticaOD "This Week in History" traces @CityofUtica 1st Urban Renewal parcel... https://t.co/ebpaqmSBVO pic.twitter.com/FrFXyS1ule

Photo caption: First urban renewal area This 1958 photo shows the 22-acre area; looking west from Genesee Street – scheduled for demolition to make room for Utica's first urban renewal project. The area was bounded roughly by Court, State, Columbia and Washington streets. That is the Saving Bank and its gold dome on the lower left and the old city hall just to its right. Columbia Street is on the extreme right. Demolition began in 1959 and, as a result, Pearl Street, which ran east-west along city hall, was eliminated as were Spring and Cooper streets east of State Street. The area later became the home of the new city hall, the Kennedy Plaza Garage and the Kennedy Plaza Apartments. [O-D FILE PHOTO]

Urban Renewal Project No. 1 began in 1962. By the summer of 1964 much had been demolished. However in 1963 power was removed from the city by Oneida County and distributed to the suburbs via a new legislature. Population had started to move out of Utica and roads and infrastructure supporting them in the suburbs hurt downtown immensely. Project No. 1 sat idle as the main developer defaulted on loans.

The failure of Project No. 1 is responsible for the current state of Haberer Building, which certain parties hold out as justify for a huge Hospital Concept. However, this concept equates for further urban renewal thinking.

East Utica, in vicinity north of Bleecker Street, between John and Mohawk Streets. A April 17, 1950 newspaper article reported it may be one of three possible projects.

This project took down many factories and homes, to also make way for the East-West Arterial project. Federal monies were used to take the land and it was given to the state for the $3.9M, 4.1-mile highway. (Newspaper clipping, 7/27/65) 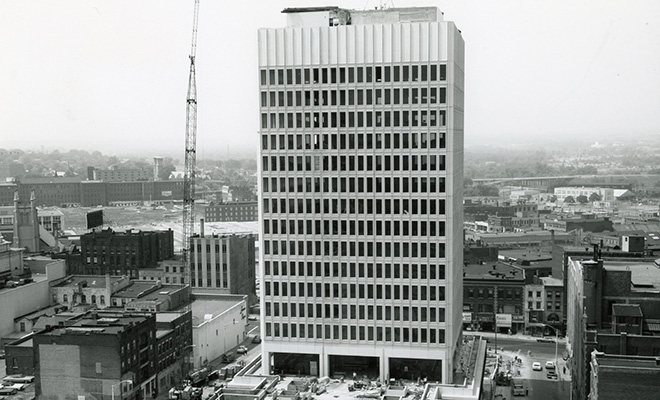 In background: City Hall is in place as well as Kennedy Garage, but beyond this a large empty lot remains from unfinished Urban Renewal Project No. 1...

We're not opposed to a new hospital, just do not bulldoze Downtown Utica's Historic Columbia-Lafayette Neighborhood... "Build It At St. Luke's!"