BUD says we must celebrate people; their companies, efforts and buildings. Individuals who have, for the past 10-15 years or so, been building the "New Downtown Utica". 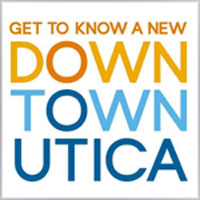 In 2015 survey results were in; although it was told, "People are feeling a little sad about downtown", we also learned, "But, we're starting to see some change...", that according to Michelle Truett of 484 Design Inc. Mayor Robert Palmieri added, "We all know what downtown was many years ago, we all envision that and what it was, but (the future) will be more exciting."

Rust belt cities have all had their ups and downs, Utica is no exception. However, there has always been an ebb-and-flow of openings and closings businesses. Too often buildings have been demolished. However, some have been refurbished and it's on an accelerating pace; there are even some new ones! Track the stories below and you get the sense there's a positive trend, a growing sense of wanting to become a "Downtowner".

1998: Hotel Utica - Perhaps Utica's newest wave all started with a hotel and one man's dream? Hotel Utica sat empty for many years, but reopened in 2001 with co-owners Joseph Carucci and Charles N. Gaetano as co-owners. A labor of love for Carucci, the hotel struggled to make loan and pay taxes, but it did inspire others, BUD knows this for sure! Read more about The Hotel Utica & Joe's Story from Dave Dudajek.

These are the stories BUD says we must know and promote! They'll help make a "Better Utica Downtown".

2000: Black River Systems - In 2000, company principals saw potential and advantages of Utica's Beleaguered Downtown. They state, "We got into this building for a good price, and we were able to expand easily. There are places to eat lunch, places to mail packages, doctors and lawyers down here." And he continues, "So you can have all the amenities of a large company without being a large company."

2002: Utica Coffee - "Our Mission is to revitalize, succeed, and give back to our community..." You can read it here, The history of the Utica Coffee Roasting Company began in 2002... Frank purchased his first building from a women that coined Bagg's Square, East & West. She also brought music to the streets of Utica before Saranac Thursdays, many know it as Utica Monday Nite - that would be Lynne Mishalanie. Today everyone knows of the success and Utica Coffee Roasting now a downtown staple

More on these above stories, and some Bagg's Square history, from Bobby Sullivan... "You see, Utica can change. We can move ahead. This city can be as good or as bad as we choose to make it. It's all in the way we think. We need more Lynne's, Frank's, and Talgo's! And, if some of the other stories unfolding within the walls of the buildings on Bagg's Square West are told, we will have them!"

WE ARE WORKING ON THESE STORIES

Have a story, we'd really love to hear from you. So please feel free to E-mail Us