BUD: Columbia-Lafayette Neighborhood Could Be Bulldozed!

Downtown Utica was highlighted in the region's MV500 Competition, where some illustrations of Utica were shown. There and later in the media, Utica residents learned the state's efforts for the hospital and economic development. One idea was to build a new downtown hospital district. The targeted area for the hospital concept is very large, in the Columbia Lafayette Neighborhood.

To do so, the first step would be to devastate downtown with wrecking balls and bulldozers...

This concept is exactly like many failed urban renewal efforts of the past. Some right here in Utica that just did not do what they were intended to do. Either way, is a large hospital district necessary?

Here's the inner-city hospital district concept. It is very unlikely to attract anyone except those needing medical attention... 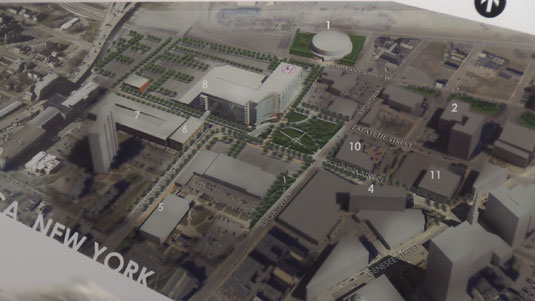 There are 64-acres at St. Luke's and as Downtown Utica has shown, reuse of old buildings is gaining a lot of speed and demand.

BUD believes very strongly to make Downtown Utica more of an attraction, we need a better plan and we can still improve health care at St. Luke's and Faxton Hospitals.

We'd love to hear from you, feel free to E-mail Us